This blog post is about Diederik cuckoo, Chrysococcyx caprius, and is illustrated with photos taken at Rietvlei Nature Reserve last summer. I wrote it for two reasons: to talk a bit about bird photography, and to illustrate something about these birds biology – they are more than just pretty colours. Diederik cuckoo are inter-African migrants that are coming back to SA around now (October), and their breeding season is about to get started. So it is a good time to learn something about them.

Diederik cuckoo gets its name from and onomatopoeic rendition of its persistent and loud deed-deed-deed-deed-er-ick call of the territorial male, which you hear often in Johannesburg during the summer. There is a pair that regularly visit our garden and the male is often heard calling in early morning from a large tree in the front yard. The specific name caprius is thought to be a misprint for either cuprea (coppery) or capensis (of Cape of Good Hope), but I like to think it is cuprea, because the birds – especially females and juveniles – often show coppery colours.

Like many birds, Diederik cuckoo are dimorphic, that is, males and females differ in appearance. As is common, the male birds have a brighter, more ‘flashy’ coloration with more distinct markings,  while the females are plainer and more camouflaged. Despite being plainer, the females are still quite colourful, and have a beauty all their own. 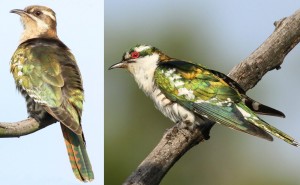 Diederik cuckoo are brood parasites, that is, the female lays its eggs in the nest of a host species, and then leaves the host(s) to raise the chick to fledging.  Hosts are mainly weavers and bishops including widowbirds, but they can also parasitise the nests of a number of small birds. In South Africa, 24 host species are known, with the most common being Cape Sparrow, Southern Masked Weaver, Cape Weaver, Village Weaver, Red Bishop, and Cape Wagtail. 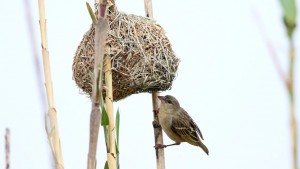 M.A. Macdonald studied Diederik cuckoo in southern Ghana from 1975 to 1978 and found that most food was taken from or close to the ground, and consisted mainly of caterpillars or similar larvae. This is also true in South Africa, rarely do they seem to eat much of anything else. Interestingly, the caterpillars that they eat are poisonous to most other birds. It is interesting that Klass’s Cuckoo also eat mainly caterpillars, but they avoid competition by virtue of the fact that they have different brood hosts, and also to some extent different habitats.

Diederik cuckoo males and females have a particularly distinct ritual feeding behaviour. After sighting a female, a male will court the female with song, and then he will fetch her a caterpillar. During this ritual feeding, the male and female engage in a vigorous dance of bobbing up and down with wings partially spread. Presumably not all such encounters are successful, but I have not observed one that wasn’t so I don’t know what the outcome would be. In a successful encounter, the caterpillar is passed from the male to the female, with an extended time – several seconds – when both birds hold one end of the caterpillar. Eventually the male lets go, and may fly off to fetch another. I have not managed to see them copulating yet, but when they do, the female flies off to lay a single egg in a host nest.

Before laying the egg, the female waits for the potential host to leave the nest and than flies inside, presumably to inspect it. She may throw the existing eggs out the nest, or carry them to a nearby perch and eat them. Afterwards, she lays one egg (occasionally two).

Once the egg is laid, the female leaves the host nest, leaving the “foster” parents to hatch and raise her offspring. A female may lay 3-5 eggs in 3-5 nests in a single day and as many as 20 to 24 eggs in as many different nests during the breeding season.

Host birds are not unaware of the Diederik cuckoo, and will often mob them en mass. I saw this in Rietvlei where the photos were taken, and it was what led me to park next to the dead tree. I saw that the southern masked weavers often chased the cuckoos away, and they went to perch in the dead tree. It is known that sometimes a cuckoo is killed by his mobbing, especially by the southern masked weaver.

Within the first three days of hatching, the cuckoo chick eats any other eggs or chicks. It is said that it does this only if the eggs or chicks weren’t present at the time of laying, but I’d like to know how it ‘knows’ this. The Diederik cuckoo chick is fed by the host in the nest for 19-22 days, and remains with its host parents and is fed by them for about 21 more days. I don’t know how widespread this is, but I have seen immature Diederik cuckoos up until late April or early May. Presumably, they tend to stay in our area a bit longer than the adults.

For me, it is so unusual to catch a pair of these birds in their prenuptial activities. The photos below describe the sequence of events. 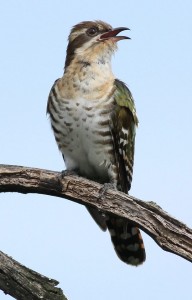 Female Diederik cuckoo alert to the presence of a male and returning his call. He is nearby with a caterpillar to offer as a gift to her. 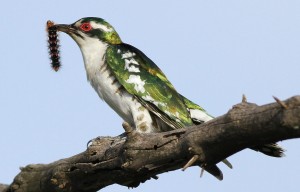 Male Diederik cuckoo with caterpillar, his prenuptial offering to the female.

Sexual selection alone may not be the only selection pressure leading to dimorphism in cuckoos. For example, recent studies have shown that female plumage became more cryptic with the evolution of brood parasitism. The degree to which this generalisation applies to the Diederik cuckoo is not known. 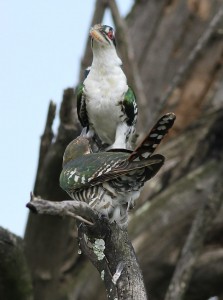 Diederik cuckoo male and female bobbing up and down in their ritualised feeding behaviour.

We Homo sapiens, and many other mammals, probably also have characteristics that arose from sexual selection by female choice. In our case, sexual selection may even have played a role in the evolution of intelligence. It may also be that human traits such as humour, music, visual art, verbal creativity, and some forms of altruism, are courtship adaptations that have been favoured through sexual selection. So know your birds, know yourself! 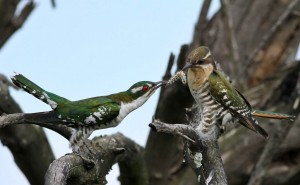 Diederik cuckoo male passing food (caterpillar) to female who is accepting his offering.

I have a decent camera, these were taken with my Canon 7D using the Canon 400mm F5.6 lens. This is the cheapest and smallest of all the Canon prime lenses, and has no image stabilisation or anything fancy like that. However, this is not the reason I was able to take these photos, I could have done it with any decent point and shoot camera because the birds were close. 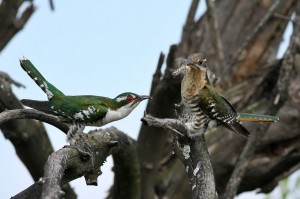 The female has accepted the food, and the male has gone off in search of another caterpillar.

That is the single most important lesson of photographing birds: you have to get close. Even the best telephoto lenses will give mediocre photos unless you get close to the birds. And that requires knowledge, skill, and above all plenty of patience. 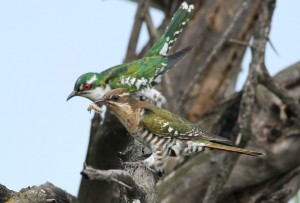 It is not long before he is back, and the bobbing dance and giving of food begins again.

I had seen Diederik cuckoo before on a few occasions, but had no idea how common they were until last year, when I learned to recognise their distinctive call. After hearing the male calling, I first saw this pair hanging around the weaver colony, I spent a whole weekend watching them, as well as reading up on their biology. I went back to this location 7 times over three weekends before I figured out what they were doing, and then spent more than half a day parked by this tree in the hot sun, and waited, just me and my Kindle and binoculars. I was so into the book I was reading on the Kindle that I nearly missed them (lesson: rather read the nature around you than a book when you want to photograph birds). Patience, persistence, willingness to tolerate discomfort, and above all knowledge is what make such photos possible.